We started the tungsten & Koa wood ring trend and still make the most spectacular Koa rings available.  It simply comes down to finding the most rare and expensive "curly" grained Koa wood. Sure, you can find cheap "koa" rings with questionable wood (we’ve been copied everywhere) but we hand pick and finish ours with Koa from the Big Island of Hawaii.  Why care? Only the tightest "curly" Koa will undulate in the light…creating movement and shimmer…pictures really can't do it justice.

THE ORIGINAL KOA TUNGSTEN RING AND STILL THE BEST

We started the tungsten Koa wood ring trend and still make the most spectacular Koa rings available. Tungsten is the perfect base metal due to it's uncompromising toughness.  6x's harder than titanium makes it scratchproof and it will retain its shine for a lifetime. Our resin inlay process ensures a life-proof representation of your relationship. FOCUS ON THE KOA, OF COURSE

It simply comes down to finding the most spectacular Koa wood, period...and we spend the time. Koa has lent itself to create everything that is wonderful about the Hawaiian Islands and its culture.  From the first outrigger canoes and surfboards to ukulele's and warrior's weapons, Koa deserves its place as the cultural anchor of Hawaii.  We personally select our Koa Wood from dead or dying trees from the Big Island of Hawaii...that's the fun part.

Yep, got you covered. Each ring comes in a beautifully created wood ring box. We stand behind all our creations and your ring is no different.  Lifetime replacement should something go wrong... they're made to last like your relationship. We will also swap sizes with you free of charge until you get your perfect ring...because that's the way it should be.

Based on 36 reviews Write a review

so I bought this for my wife to commemorate our 5 years together with a traditional wood gift. its perfect. the wood looks amazing, its durable as can be, and arrived incredibly fast. the only regret is I didnt buy another one for me

I cannot brag about Pono enough. I purchased men's watch, two cell phone cases, and ring. All Koa wood and they are all top quality and beautiful. Customer service from Brett has been absolutely top notch. I'm waiting for more inventory on the minimalist carbo strap wallet as this is my next purchase! Please support this amazing company!

Gorgeous ring, now if only COVID would let us get to Kona for the wedding! I originally ordered the wrong size. Brett sent me a few options so we could get the right size and send the others back. Saved a ton on shipping things back and forth to get the right size. Thank you!!!

B
B.
Husband approved!

I should probably start this off by saying that my husband was born in Hawaii and lived there for about 25 years. He left Hawaii and moved to Virginia, and has since become the biggest critic of “Hawaiian” type things. His biggest pet peeve is when something is called Hawaiian just because it has pineapple in it or on it. After almost 10 years together, we got married. Long story short.. found out he’s diabetic. Changed our diet. He lost weight, his wedding ring didn’t fit anymore. Because of what it’s made out of, I was told his ring couldn’t be resized, so I set out to find another that met his “not to flashy” criteria. I happened upon this shop and hit the jackpot. Because I wanted it to be a surprise, I guessed a ring size I hoped would fit and when it arrived I gave it to him. Although it was the wrong size, he absolutely loved it! After 2 more ring size changes, which were super easy, we finally have one that fits and he is so happy with it. I guess it’s common for people in Hawaii to move, usually to California or someplace on the west coast. He went a bit further when he came to Virginia and says it’s nice to now have a “true” piece of home with him. Thank you so much! 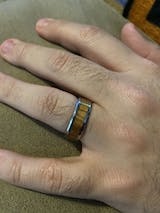 What a great price for a Koa wood ring! It is beautiful. It is very comfortable too. I am definitely happy with it. I would order a replacement in a heartbeat if I ever lost it!

We don't write often but you'll get the latest releases, sales and more …